Be Our Guest Dinner Review

On our last trip to Disney World we were able to snag a dining reservation to one of the newest restaurants in Magic Kingdom- Be Our Guest. It was very shocking to us because we had heard that it was nearly impossible to get  reservation here, but we were able to get one no problem. With that being said if you are reading this and you want to go to Be Our Guest it would be a good idea to make reservations 180 days before your trip. From what our friends and others say it is really hard to get reservatinos to this restaurant at the time you want it. 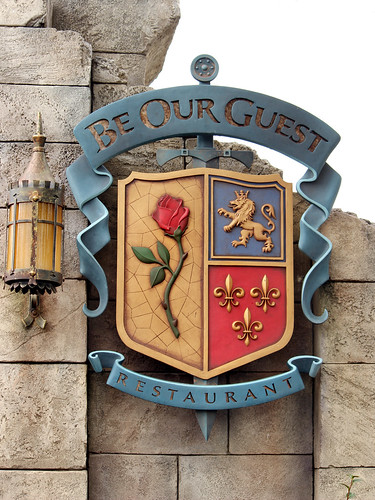 
Be Our Guest is located in New Fantasyland in-between Voyage of the Little Mermaid and Enchanted Tales with Belle. It is also across from the new 7 Dwarfs Mine Train attraction. The ambiance of this place is incredible. It starts right when you get to the gate. When we stepped up there was a "gatekeeper" making sure everyone that went through had reservations with the "host" which would be the Beast. We went over to the hostess and told her we had reservations and she accidentally spoiled a wonderful surprise, which we will get to later. When you walk past the gates you are greeted by two giant gargoyles that are guarding the castle. They are magnificent to look at! Unfortunately, C & K's phones have both died at this point which was very upsetting. We will do our best to get pictures on our next trip.

After you walk through the Beast's castle doors you beginning feeling like you have walked right into the animated movie of Beauty and the Beast. There is everything from the stain glass window of Belle and the Beast to random suits of armor that make you feel like you are right in the heart of the animated version of France. When we went past the entrance and got to our seats it was uncanny how close the room we were sitting in looked like the movie. We were seated in the Ballroom which, as you all know, is the iconic room where Beast and Belle dance to Beauty and the Beast. Everything was breath taking. The chandeliers, the paintings, and the snow coming down from the windows inside the castle was amazing to look at. At this moment we were kicking ourselves for not having our phones charged to have some amazing pictures for you. 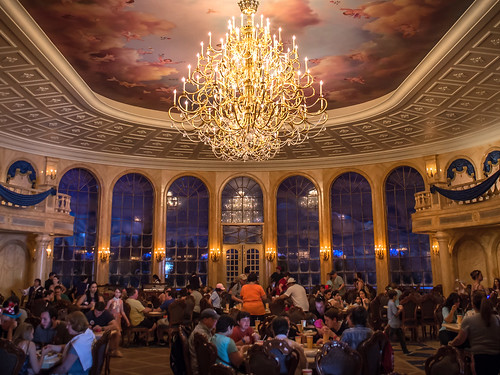 We ordered our drinks and were still mesmerized by the sights of the Beast castle. Shortly after being seated and ordering our drinks the lights went dim and a voice came over the loud speaker. The announcement was introducing the "Host" to our dinner. When that happened, the Beast himself came strolling through the ballroom. He was greeting and waving at all of his guests. It was a very fun
experience!

After the Beast had went through the Ballroom we started looking at the menu. There were many meat options, but C decided to go with the grilled stake with Pomme Frites. K is not much of a meat eater so she decided to just go with the solid kid's Mach & Cheese. There is absolutely nothing wrong with being a 23 year old adult and eating Mac & Cheese for dinner in the place where dreams come true!

When our food came there was another announcement for the Beast to walk through. We clapped along with everyone and started eating. K really enjoyed her kid's Mac & Cheese. C's stake was nothing to write home about. It was not very flavorful, but the stake sauce really helped. C contemplated getting a non alcoholic drink that is served in a souvenir glass, but decided against it because the glass was the only thing he wanted. C ended up getting the glass in store in Fantasyland and did not have to pay for the drink.

The best part of the night happened after we had received our food. Remember that surpirsed that was almost ruined when we were with the hostess? Well after our food came C told the waitress we should have something in the back for us. K was very confused but was very excited when a special order cake came out! It was a great way to celebrate our 1 year anniversary. If you are interested in getting a special cake check out our our post on Disney World cakes to get more information! They brought out our cake and we enjoyed it a lot. Our waitress was amazed at this cake. She said she didn't even know Walt Disney World did anything like this. With that, she was wanting to help us celebrate even more and gave us the famous "Grey Stuff" on the house! Although it was delicious you didn't have to ask the dishes to know it was just icing. K enjoyed it much more than C did. 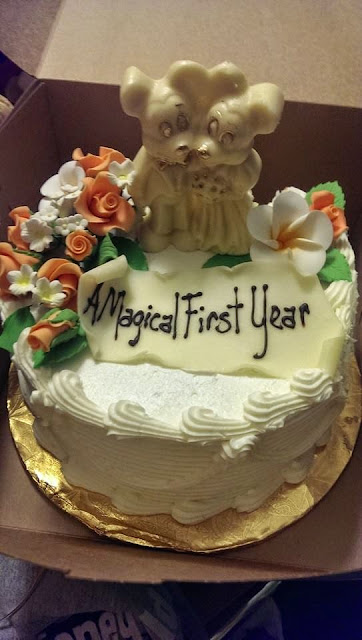 After we finished a piece of our cake (It was HUGE), we decided to see the other two rooms. To the left of the Ballroom is the West Wing. If you remember from the movie, this is the forbidden area the Beast tells Belle never to go. In this room there is a picture of Adam, the prince before he was the Beast. Ever so often, the picture will show claw marks just as it was in the movie. The best part of this room was the infamous rose that is from the movie. It was beautiful to see. The other room in the castle was the library that was given to Belle. In this room there is a statue of Beast and Belle. We did not spend much time in this room because it was not as good as the other two rooms. 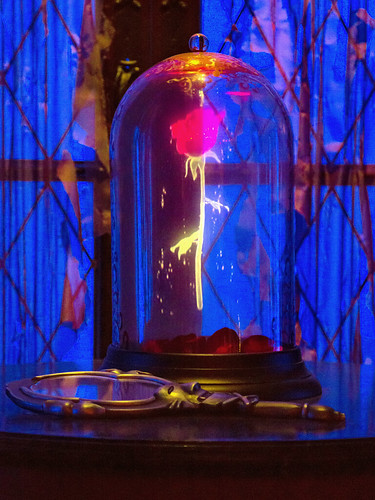 One of the best things after you finish your dinner, you are able to meet the host himself. As we said, the Beast roams the castle ever so often to greet guest. We saw him three different times while we were sitting. We went to meet him and he was a wonderful character! We got many shots with him and he was very appreciative of our cake. He attempted to hide it from us so he can take it to his room and eat it, but graciously gave it back to us because it was our anniversary. 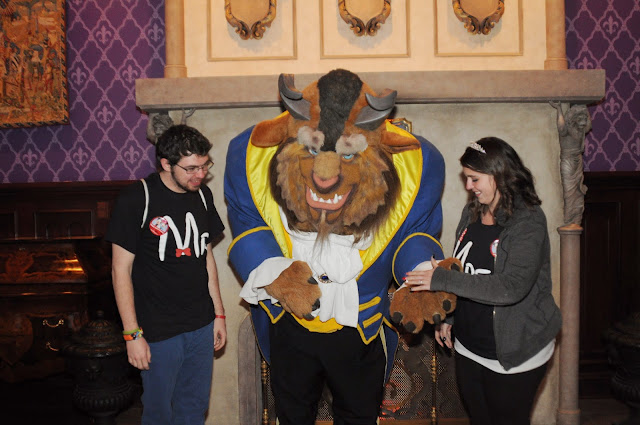 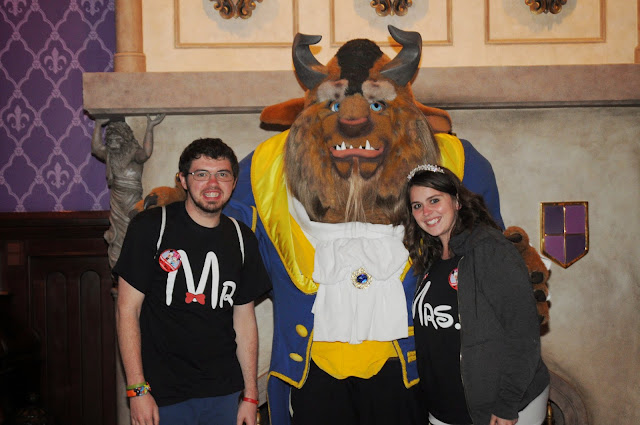 Overall Be Our Guest has a fantastic atmosphere and is totally worth going to see it. The food is not the best in the world, but experiencing the Beast's home is worth it!

Tell us what you think about Be Our Guest! Have you been there or planning to go there? What would you recommend?
Posted by Unknown at 11:30 AM